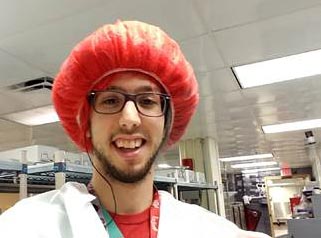 Ask Robert Garrison Jr., ’80 DDS, what he likes most about dentistry and he’ll tell you—it’s the people. He loves their stories, he’s quick to laugh with them, and he always says yes when a pre-dental student asks to shadow him.

It’s no wonder, then, that Dr. Garrison’s interest was piqued when a job coach from Ohio State’s Nisonger Center for Intellectual and Developmental Disabilities called his Columbus-based Kenny Road Family Dental practice with an unusual request: Would Dr. Garrison be willing to take an intern on the autism spectrum to assist with equipment sterilizing?

“It was easy to say yes,” Dr. Garrison recalled. For one thing, his nephew is on the autism spectrum, so he had an idea of the challenges this intern might face. And also, said Dr. Garrison, “I have long felt in the back of my mind that this particular position is custom made for someone with a disability. There’s a repetition to it and a need for neatness and cleanliness, and someone could be very happy doing that and doing a great job. And that’s what happened.”

And with that easy decision, Dr. Garrison and his staff helped change the trajectory of Austin Shirk’s life.

For years, Dave and Dina Shirk worried what opportunities would be available for their son, Austin. Diagnosed on the autism spectrum as a child, Austin dealt with a number of sensory and learning challenges that made the transition to adulthood and independent living difficult. “We had hired job coaches for Austin in his late teens and found it very hard to find anyone willing to take a chance employing someone with a disability,” said Dave Shirk. “We personally believed that additional post-secondary education and training would help him become more employable.”

Though the Shirks live in Texas, they are Ohio natives and Ohio State graduates, and they had learned about the Nisonger Center years before. When they heard about Nisonger’s TOPS program—short for Transition Options in Postsecondary Settings for Students with Intellectual and Developmental Disabilities—they hoped it would be a great fit for Austin. It was.

“I love having been a part of Austin's success story. I'm very proud of him” -- Robert Garrison Jr., '80 DDS

Along with opportunities to take college classes and develop skills, the TOPS program assessed Austin’s employment interests and aptitudes—including placing him in internships. “I went through the TOPS program for two years and did a bunch of different internships to see what my interests were, what I liked to do and got out of my comfort zone,” said Austin.

When the TOPS program connected him with Dr. Garrison’s office, he was on the path to success.

A hard worker with an ever-present smile

During his internship with Dr. Garrison’s practice, Austin trained alongside the staff. “Austin played a critical role,” said Dr. Garrison. “You have to have all the instruments sterilized or diseases can transfer. It’s not a glamour job, but it’s highly critical.”

Beyond the great work Austin performed, his positive disposition was a good fit for the office.

“That young man has a smile on his face all the time,” said registered dental hygienist Mary Jo Sharick, who has been with Kenny Road Family Dental for almost seven years.

“He worked in the sterilization area right behind my operatory. If I turned around to get something and caught his eye, he would give me the biggest smile.”

Austin’s success story is a testament to what can happen when employers embrace people with disabilities and their contributions. After graduating from the TOPS program, Austin landed a full-time position with the Central Sterile Supply department of Ohio State’s Wexner Medical Center, where he has worked for more than two years. Austin, now 25, loves his job sterilizing and organizing instruments. He also loves keeping in touch with his friends at Kenny Road Family Dental. “I did an internship with Dr. Garrison and built a great relationship. I like to keep in touch with them,” said Austin.

Dr. Garrison is proud of his practice’s humble role in launching Austin into an independent future. “He’s gainfully employed and on his own, doing well,” said Dr. Garrison. “I love having been a part of Austin’s success story. I’m very proud of him.”